Caruana’s model (1997) is the most popular choice, when we want to learn from multiple tasks. It relies on learning a shared representation function \(f\) across all the tasks. The output of the function \(f\) is used as input to a task-specific classification layer \(g_i\), to generate predictions for task \(i\). Formally, the classifier for task \(i\) is \begin{equation} h_i := g_i \circ f. \nonumber \end{equation}

In order to tackle our earlier example, we need to learn a single representation \(f\) for oranges, bananas, strawberries and raspberries. For example, we can learn \(f\) using a Resnet backbone. The learnable parameters of \(f\) usually make up most of the parameters in the network since it helps us achieve better sample complexity bounds (Baxter 2000). In addition, we need to learn \(g_1\) and \(g_2\), which are linear layers attached to the Resnet backbone. \(g_1\) is used to identify if the image is a strawberry or a raspberry and \(g_2\) is used to determine if the image is a banana or orange. 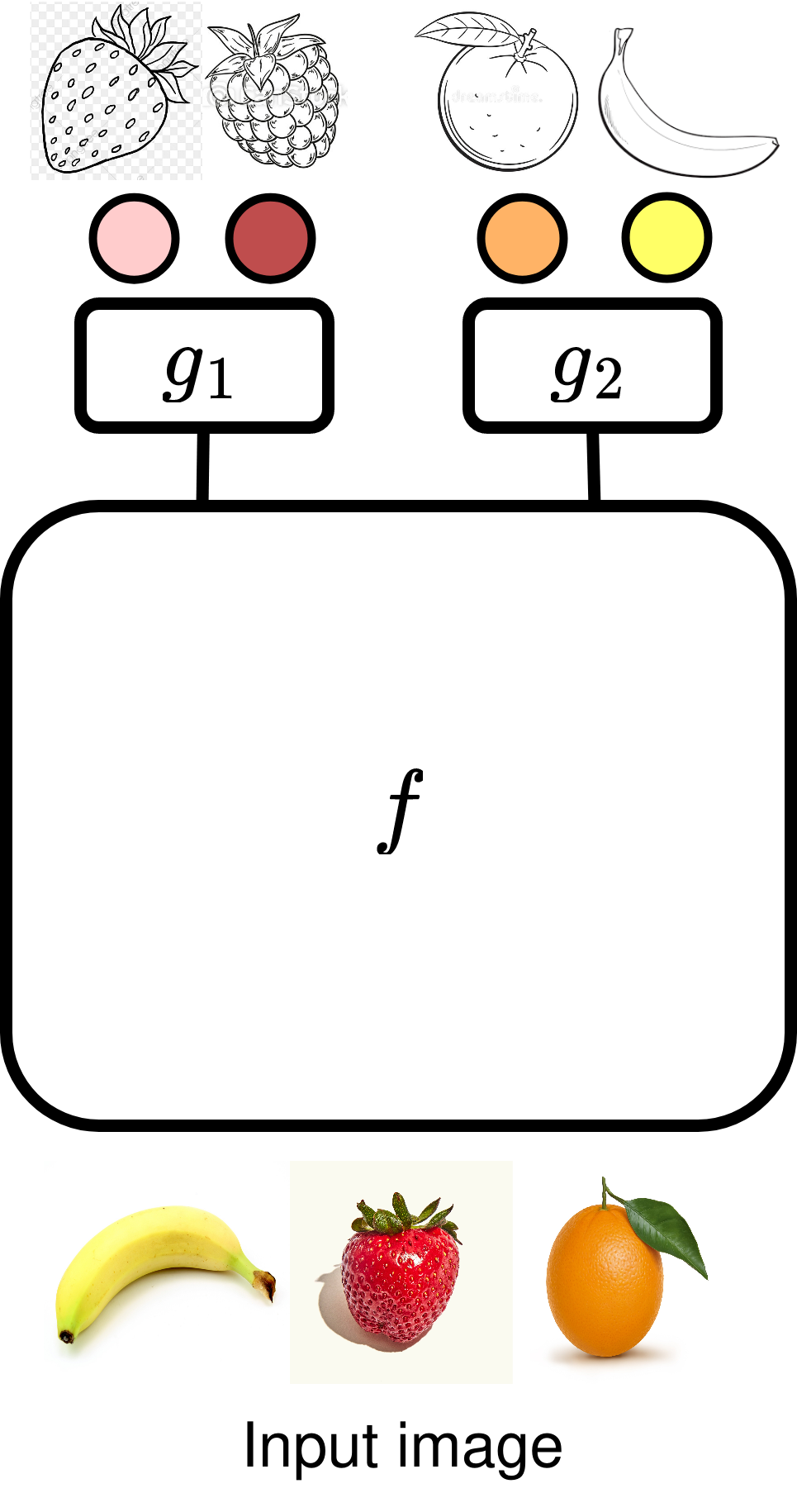 The multi-task model proposed by Rich Caruana continues to remain the most popular architecture when we want to learn from multiple tasks; This includes areas like multi-task learning, meta-learning or continual learning. The model is trained to minimize the sum of losses on all the tasks.

What does a typical continual learner look like? Most methods train a single network — one that looks like Caruana’s multi-task model — on a sequence of tasks. At every episode, the network learns to tackle the new task while trying to maintain its ability to address past tasks. The latter is enforced using auxiliary losses or constraints on the gradients.

Caruana’s model assumes that all tasks share a single representation \(f\). This assumption requires all tasks to be similar to each other, which is less likely to be true if we have a large number of tasks. Yet, this model continues to remain the most popular choice architecture, even if we have to tackle many tasks, like in continual learning.

Under Caruana’s multi-task model, we see that tasks can both help and hurt each other. The below matrix is representative of distances between every pair of tasks. It is the decrease (red) or increase (green) in accuracy when we train two tasks together, compared to training on a single task. Clearly, not all pairs of tasks benefit each other – evident from the red cells in the matrix.

The matrix is representative of task distances on 20 5-way classification tasks constructed from the CIFAR-100 dataset; Each cell is the relative change in accuracy when we train on two tasks as opposed to one task. Ideally, we should use this matrix to determine which tasks should be trained together. However, estimating this distance matrix is expensive, particularly in continual learning, where all tasks are not available a priori.

We (Ramesh and Chaudhari 2022) formalize this idea using the task-competition theorem. We show that dissimilar tasks fight over the model’s capacity and they benefit from being trained on separate models. This observation inspires us to build Model Zoo, which is capable of expanding its model capacity to accommodate dissimilar tasks.

The above figure depicts one episode of Model Zoo training. The training loss (at the top of the figure) is computed using the first two learners. The training loss is used to determine which tasks should be trained together in the third model.

The zoo’s output for a particular task is computed by averaging the outputs of all models trained on that task. For example, the output of the green task is the average of the green output heads of the first two models. The outputs of the orange and yellow tasks can be computed using a single model (orange head of the second model and yellow head of the third model respectively).

Identifying related sets of tasks is the most important component of the zoo; This determines which tasks are trained together. Often, figuring out the relatedness tasks is as expensive as training on those tasks. For continual learning, we seek an inexpensive proxy for the distance between tasks, in order to split the tasks into related subsets.

Continual learning has many formulations which makes it hard to compare different methods. They vary on factors like model storage, sample storage or compute. Methods typically either store no data from previous tasks, or use a limited replay buffer to store a fraction (around 5-10%) of the data from previous tasks. Catastrophic forgetting — a tendency of the model to rapidly forget the solution to past tasks — is commonly observed in these settings and addressing this, is the primary focus of most existing methods.

In our work, we show that a learner that shares no information between the tasks i.e., it does no real continual learning, performs better than existing methods. We call this method Isolated in our work. Isolated has low training times and uses no replay buffer but grows it model capacity linearly with the number of tasks. Existing methods scale well with respect to model size, but fail to achieve good generalization errors.

In the above plot, we track the accuracy averaged over all tasks, over 20 episodes of continual learning. Different methods are evaluated in the single-epoch setting where the model is allowed one epoch of training, at every episode of continual learning. Regardless of the architecture (a small convolution network or Resnet18-S), Isolated outperforms other methods. This indicates that existing methods fail to transfer between different tasks. We find a similar trend in the multi-epoch setting too.

Model Zoo on the other hand, is able to outperform the Isolated baseline. It improves on previous tasks (backward transfer) and has an improved ability to solve new tasks (forward transfer). The zoo has low training and inference times compared to other methods but grows its model capacity at every episode and uses a replay buffer.

We track the accuracy of each task from the Split-MiniImagenet dataset which consists of 20 5-way classification problems. 'X', which denote the accuracy of Isolated on a new task, is usually lower accuracy than Model Zoo's accuracy on the same task when it is first seen. Additionally, the accuracy of past tasks improve over episodes of continual learning.

Model Zoo shows that growing the capacity of the model, can help us build effective continual learners. If you are interested in exploring Model Zoos, consider checking out our ICLR 22 paper or this jupyter notebook