14 Jul 2022 How do we pre-train a model using unlabeled data? In this blog post, we tackle this question by adopting the bayesian perspective; Probabilities are used to represent a state of knowledge. Instead of learning a single pre-trained model, we learn a prior -- or a probability distribution over the model's parameters. It is instructive to consider a specific example: estimating the bias of a coin. A prior is used to quantify our belief about the coin's bias before we observe any data. It is common to represent this prior using a beta distribution. If we believe that the coin is unbiased, then we can encode this belief using a beta-distribution with $$\alpha=\beta$$.

The beta distribution can be used to represent the prior for the bias of a coin. When alpha=2 and beta=5, the prior represents the belief that the coin is biased towards tails.
## Uniformative Priors It is hard to determine what the prior should be in many instances -- an issue that dates back to the likes of Bayes and Laplace. Revisiting our earlier example, we may not have any particular belief regarding the bias of the coin. How do we represent a *state of ignorance*? A natural choice for the prior is a uniform distribution over model's parameters motivated by Laplace's principle for insufficient reason. This would correspond to a uniform distribution over the interval $$[0, 1]$$, for the bias of the coin. While the uniform prior seems like a reasonable choice, it is not considered an uninformative prior (a prior that attempts to codify ignorance). Ideally, an uninformative prior should be invariant to re-parameterizations, which is the most common criticism levied against uniform priors. Let us consider the problem of estimating the variance of a Gaussian random variable $$X = \mathcal{N}(0, \sigma^2)$$ with a uniform prior. We can estimate both $$\sigma$$ and $$\log \sigma$$, both of which are reasonable choices. However, the resulting posterior will look different depending on the choice of parameterization. A uniform prior over $$\sigma$$ assigns a larger probability mass to values near $$\infty$$ compared to a uniform prior for $$\log \sigma$$. The uniform prior is often informative, which is not desirable. The key idea behind uniformative priors is to operate in probability space, as opposed to the parameter space. If we have a probability model $$p_{w}(z)$$, then it is easier to specify priors using conditions on $$p_{w}$$ as opposed to conditions on $$w$$. The Jeffrey's prior is a popular uniformative prior that is uniform in probability space. In this blog, we will focus on another closely related uninformative prior. ## Reference Priors Reference priors (Bernardo 1979) are based on the guiding principle that *the data should dominate the posterior -- not the prior*. A prior that maximizes the KL-divergence with the posterior allows the data to be maximally informative. We codify this idea through a maximization problem -- the solution to which is the reference prior. Let $$Z$$ be a random variable that represents the data, and let $$w$$ be the parameters of the model. Additionally, let $$T(Z)$$ be a sufficient statistic for $$w$$. A sufficient statistic summarizes the information from the entire random sample of $$Z$$. Estimating $$w$$ using the entire random sample is identical to estimating $$w$$ using just the sufficient statistic $$T$$. The reference prior $$\pi^*$$ maximizes the KL-divergence between the prior and the posterior, averaged over distribution $$p(t)$$ of the sufficient statistic: \begin{equation} \pi^* := \argmax_{\pi} \ \ \mathbb{E}_{t} \left[ KL(p(w \mid t) \mid \pi(w)) \right] \end{equation} Equation (1) is also the mutual information between $$w$$ and $$t$$. Intuitively, the prior maximizes the information that is missing between $$w$$ and $$t$$. The reference prior is invariant to re-parameterizations of $$w$$ since it is defined using the mutual information. However, we do not know $$t$$ for most problems, making Equation (1) computationally intractable. Bernado proposed estimating $$\pi^*$$ as a limit of a sequence, i.e. \begin{equation} \pi^* := \lim_{n \rightarrow \infty} \pi^n = \lim_{n \rightarrow \infty} \argmax_{\pi} \ \ \mathbb{E}_{z^n} \left[ KL(p(w \mid z^n) \mid \pi(w)) \right] \end{equation} where $$z^n$$ represents $$n$$-random samples of $$Z$$. $$\pi^n$$ is called the $$n$$-reference prior where $$n$$ is the order. Priors are computed without any data or evidence. This is also true for the reference prior. The objective for the $$n$$-reference prior depends on the posterior $$p(w \mid z^n)$$. However, the posterior is computed using samples that were synthesized by the model and does not use data. In particular, we consider the "imagined" data distribution \begin{equation} p(z) = \int p(z \mid w) \pi(w) \ \text{d} w, \notag \end{equation} when we compute the expectation in the reference prior. $$n$$-reference priors are supported on a finite number of points in (Zhang 1994), i.e. \begin{equation} \pi^n(w) = \sum_{i=1}^K p_i \delta_{w_i}. \notag \end{equation} This intuitively holds since the dataset $$z^n$$ is finite. We revisit the coin-tossing example and visualize the $$n$$-reference prior for different orders $$n$$. For $$n=1$$, the prior is a uniform probability over two points $$p=0$$ and $$p=1$$. If we have only one sample, then the 1-reference prior assigns probability masses to the two possible outcomes, thereby maximizing the information gained from the data. 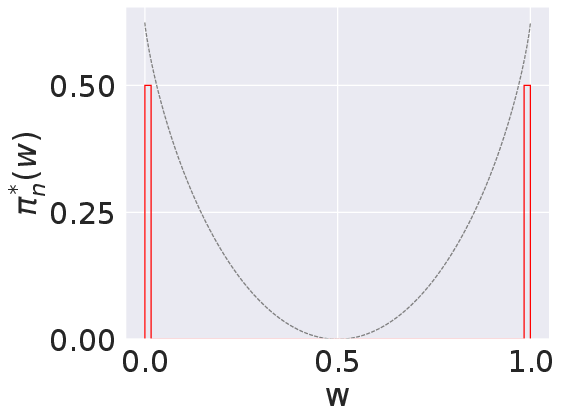 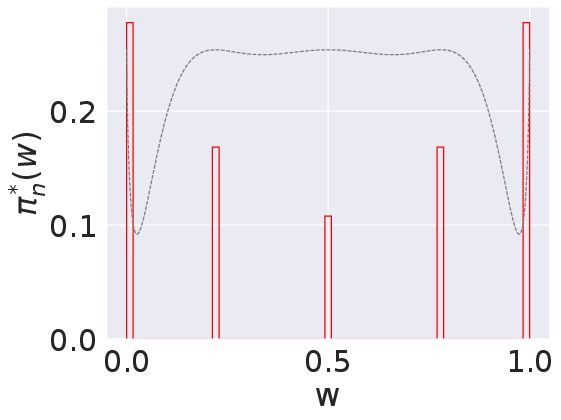 We compute the n-reference prior for orders n=1 (top) and n=10 (bottom) for the coin-tossing example. The priors are supported on a discrete set of points.
## Deep Reference Priors How do we compute the reference prior using neural networks for the model family. ## Resources: * https://www.youtube.com/watch?v=pNkeDdFs0QQ * Mattingly ## References